Divided into three counties (Caledonia, Essex and Orleans), the Northeast Kingdom encompasses 48 towns, one city, and one municipality comprised of six unified towns and gores, with a land area of 2,027 square miles (5,250 km2), about 21% of the state of Vermont. 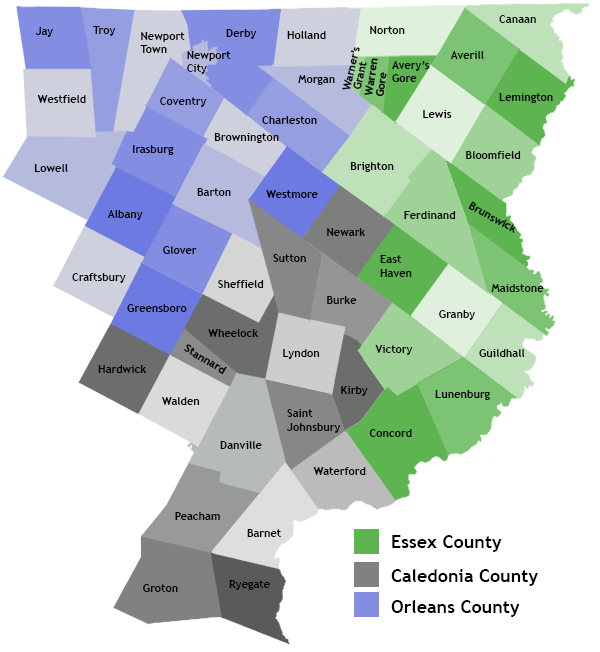 In Vermont, the written term "NEK" is often used. The term "Northeast Kingdom" is attributed to George D. Aiken, former Governor of Vermont and a U.S. senator, who first used the term in a 1949 speech. The area is often referred to by Vermonters simply as "The Kingdom." Because of its three-county extent, it includes several "gateway" towns: at the southeastern corner, St. Johnsbury, just a few miles from the New Hampshire border; to the north, Newport and Derby, close to the Canada–US border; and to the southwest, Hardwick and Danville. Interstate 91, Interstate 93, and U.S. Route 2 connect travelers to the Northeast Kingdom.

The Kingdom offers breath-taking scenery, outstanding lodging and dining, ecotourism and agritourism, Vermont made products, and recreational opportunities which have gained the Northeast Kingdom national and international recognition.

To learn more about our towns, click on the map at the left.